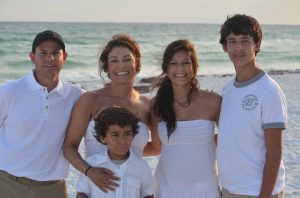 Hello ladies and gentlemen! Welcome to the Waxing Mania blog!

Coming from humble beginnings, Jackie worked hard to build what she has today, so we decided to sit down and ask her about it!

WM: Where did you grow up and what was your family like?

JF: I was born in a small country town in the heart of Brazil called Serranopolis. My grandparents lived on a farm, where I spent most of my childhood helping out with the daily chores and activities of farm life. While my mother was pregnant with me, my father was killed in a car accident and my mother was left with 2 young children and a baby on the way. She was so brave and always worked incredibly hard to raise us and provide for us. I think that might be where I get my hard worker, go-getter qualities from.

WM: When and why did you decide to move from Brazil to the United States?

JF: I moved to America in March of 1995.  My husband and I were in our early 20’s and we had three year old Gabby at the time. Brazil was in an economic crisis which negatively affected the aviation industry in which my husband Albert, lost his job.  My mother had gone to visit a friend in the United States around the same time and she fell in love. She would tell me about how great is was and how there was so much opportunity there for us. We hadn’t really owned much of anything in Brazil so the only thing we would leave behind was family and friends. So we packed our things and decided to chase the great American Dream! We had nothing, but right before we embarked on our flight, my step-father handed me a $100 bill. That is all we had when we got to Atlanta.

WM: What did you do for work when you arrived in the United States?

JF: My husband and I put an announcement in in Marietta Journal for house keeping services. We had no idea what to expect. The first day our ad was published, we received a phone call from our very first client, Mrs. Polly Sclotman! She was so sweet to us and referred us to all her friends and family. She really helped us start our business, and to this day, she is  still  a very special friend to us.

WM: Was the language barrier difficult?

JF: For my husband, not SO much. He had studied English in Brazil when he was younger. But I didn’t know a word of English when I got here! Just “Hi” and “Bye”.  The language barrier actually made for some funny stories along the way. One of the funniest, is when I got to one of my client’s houses to clean, before I began, she told me “Please watch out for the ants, they’re coming in everywhere!” So I said “Wow! Very nice, good for you, I’m happy for you!”  I thought she was talking about her AUNTS!  She was an older lady so I thought, wow for her aunts to still be alive is very rare! She looked at me like I was from another planet! A week later I was telling Albert the story and he told me the difference between AUNTS and ANTS! I was so embarrassed.

WM: Why did you decide to become an Esthetician?

JF: After working with in house cleaning for 15 years, I began to feel extremely fatigued. I could tell it was wearing my body out. My mother was and is still a great Esthetician and I had always admired that kind of work. She gave me the idea of going to school to get my license. So with the support of my husband I quit working and went to school full time.

WM: How did you start waxing? What made you want to open your own business?

JF: When I was in school, we learned a variety of skills. When I had my first waxing class, I realized this would be what I would most have success in. When I lived in Brazil, we did our own waxing at home. Me and my friends would wax each other so I already had some experience with waxing. At school, I helped a lot of my class mates learn to do the authentic Brazilian Wax because that was something they didn’t teach at my school.  As far as Waxing Mania goes, on the first day of class, my instructor asked us to create a mock business plan as a project.  Instantly the name “waxing mania” came to mind! And from that day I always had it in the back of my mind. When I finished school I went and registered Waxing Mania LLC. as a business and we started from there.

WM: Tell me about your family.

JF: My husband Albert and I have three wonderful kids. Gabriella, the oldest, is 22. Mathews is 16, and Gregory my youngest is 9!

WM: How long has Waxing Mania been open and how has the store’s progress been?

We opened in December 2012. Business is great! We have increased by 55% from the first year and we’re still growing everyday. Thank God!