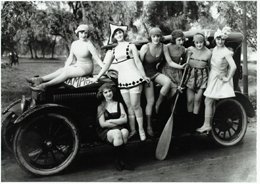 In The Early 20th Century

In the early 20th century, the combination of the establishment of female collegiate alternatives to traditionally male-only universities and the invention of the car created “The Road Trip” as a mechanism among college students for the co-mingling of the sexes.

Finally, while the custom ebbed and flowed with the times, by the 20th century college was firmly enschonced next to military service as a primary opportunity for the iniation into inebriation among the 18-22 year-old generation. Thus, the major components of today’s Spring Break actually have their antecedents in long-standing collegiate behaviors.

However, it took a further technological development to meld them into the cultural icon that Spring Break now represents. Therefore, Spring Break, as we know it today, did not begin until the 1960’s, thanks to the invention of what life-altering technology????